Hello everybody, and welcome back to my blog! These two past weeks have been busy ones. On November 11 was Veterans Day, and in science class we made a class slide on symbiosis. So I that you guys enjoy this weeks blog post!

You may or may not be asking yourself “What is symbiosis?” well let me tell you it’s pretty simple! Symbiosis is where an animal is getting benefitted or is not affected and even an animal could be harmed Symbiosis is separated into 3 different categories…

Mutualism: is where both animals get the benefit that they need

Commensalism: is where one animal is benefited but the other animal is not affected

Parasitism: is where one animal is getting the benefit that they need and the other animal is harmed

Well that is all for this weeks blog post, I hope you all enjoyed Bye!

Hey guys, welcome back to my blog! I just finished a really good book called… “The Night Diary, and I want to encourage you guys to read the book. I also had a super busy week with all sorts of different, crazy, fun things over these past 2 weeks and I just want to tell you guys about it.

The Night Diary by Verra Hiranandani

So let’s just start off with the basics, So basically the main character Nisha, her brother Amil, her papa and her grandmother have to cross the border to the new india known as Jodhpur. Little do they know what they are leaving behind. Cooking with Kazi, their furniture the house they grew up in. Will they make it across the border alive? Will they make it to safety? Will Kazi make a comeback?

Another thing that I did this week was Robotix! We had a rover named Tommy. It was very hard to steer the rover and get it moving in the right direction. It took lots of coding. Me and my friends constructed a maze and eventually my friends and I eventually got the rover through the maze. When it was time to present our maze and our rover/Tommy he kept spinning in circles which we called them pirouettes which he had a lot of fun doing. Anyway he kept rolling over the rulers which was the outline of the maze and it wasn’t what the rover was supposed to do, but we let the kindergarteners steer the rover/Tommy and they had a lot of fun steering Tommy!

The next thing that we did was get introduced to book clubs! My friends and I are doing a book called Wonder. It’s about this 10 year old  kid named Augest/Auggie who was homeschooled for his whole life because he was getting made fun of because of his disease called Treacher Collins Syndrome, . This is a disease that Auggie was born with and he needs a lot of surgeries to correct. Auggie faces a lot of challenges with bullying from this kid named Jullian while his sister is dealing with friend issues.

Well that’s all for this week’s blog post, I hope you guys enjoyed… Bye!

What My Blog Is About 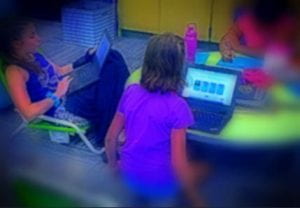 When you adventure into my blog with your amazing minds, you may wonder what my blog is about?! Well my blog is going to be about my learning at my school. You will be hearing about Personalized learning and many more amazing things and amazing people (Teacher and Friends)

What We Have Done Throughout These Past Six Weeks

So far we have taken a couple of math and science quizzes! The best thing about that is that my awesome Math and Science teacher (Mr. Farmer) let’s us retake the quiz one or two times to improve our scores and whatever score is the highest that we get is the score that he put in the grade book. Also we have done Mona Lesa paintings in art! In my reading, writing, and social studies class we haven’t done much in social studies yet but i’m sure we will get there! My other awesome teacher (Mrs. Harrod) has been reading a book called Restart and it is so good but… No Spoilers! We read every single day! So far I have read 4 genres and 4 books! And we have done a pretty amazing quick write!

Welcome to your brand new blog at Edublogs!

To get started, simply visit your blog’s dashboard, edit or delete this post and check out all the other options available to you.

We can walk you through step-by-step in our guide to getting started with your blog.